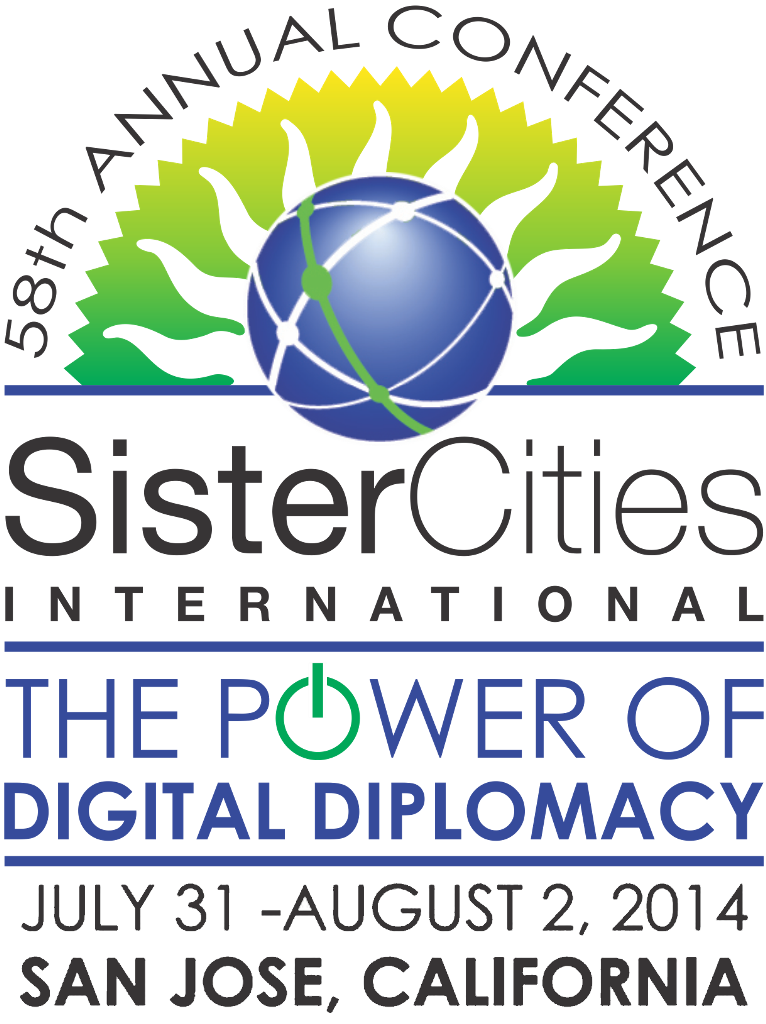 WASHINGTON, DC (July 14, 2014) – Sister Cities International will host its 58th Annual Conference in the exciting capital of Silicon Valley, San Jose, California from July 31-August 2, 2014. Over three days, approximately 500 elected and municipal officials, engaged citizens, diplomats, youth and young professionals, and business leaders from the U.S. and around the world will meet to share ideas and best practices during the Conference on the theme “The Power of Digital Diplomacy.”

The Conference will celebrate and promote the many ways in which technology can be used to enhance sister city programs and facilitate global engagement. This year’s Conference agenda consists of specialized sessions on topics including green technology, sports diplomacy, diaspora engagement, and media relations and protocol; regional tracks on Asia Pacific and Latin America; the Lou Press Golf Tournament; and more. In the spirit of her hit song, “Do You Know the Way to San Jose?” Dionne Warwick will join Sister Cities International during a special concert performance at the Conference.

“The mission of Sister Cities International to promote peace through mutual respect, understanding and cooperation, one individual, one community at a time, is nowhere better highlighted than in San Jose.  Here, people from all over the world have come together and demonstrated what happens when we focus on what we have in common rather than on our differences, resulting in the creation of cutting-edge technologies, jobs, wealth and products that improve the lives of people around the globe.” said San Jose Mayor Chuck Reed.  “I welcome all delegates to San Jose and hope you have many opportunities during the conference to advance people-to-people citizen diplomacy as proposed by President Eisenhower when the US sister city program was founded in 1956.“

The 2014 Sister Cities International Annual Conference additionally features a concurrent Youth Leadership Summit for high school students (ages 14-18). The Summit is designed to engage the next generation of leaders and expose them to important global challenges. The theme this year is “Water as a Shared Commodity.”

The Honorable Norman Y. Mineta, former Congressman and Secretary of Transportation, and Honorable Condoleezza Rice, former Secretary of State serve as National Co-chairs of the Conference Honorary Host Committee. Steve Wozniak, co-founder of Apple, and Carl Guardino, President and CEO of the Silicon Valley Leadership Group, are the Corporate Co-chairs. Mary Ellen and Michael Fox serve as Community Co-Chairs. They are joined by several Senators and Members of Congress on the Honorary Host Committee.  For more information about the Conference, visit www.SisterCitiesConference.org. To learn more about the Dionne Warwick: Do You Know the Way to San Jose? Concert, visit www.dionnewarwicksanjose.com.

Founded by President Dwight D. Eisenhower in 1956, Sister Cities International serves as the national membership organization for over 500 individual sister cities, counties, and states across the United States with relationships in nearly 2,000 communities in 140 countries on six continents. This sister city network unites tens of thousands of citizen diplomats and volunteers who work tirelessly to promote the organizations’ mission of creating world peace and understanding through economic and sustainable development programs, youth and education projects, arts and culture, and humanitarian assistance.

Stay up-to-date with Sister City announcements and events. Get our latest news by email by signing up